In case you haven’t seen our program, here’s an electronic version of the complete Blossom Time schedule for your reference. 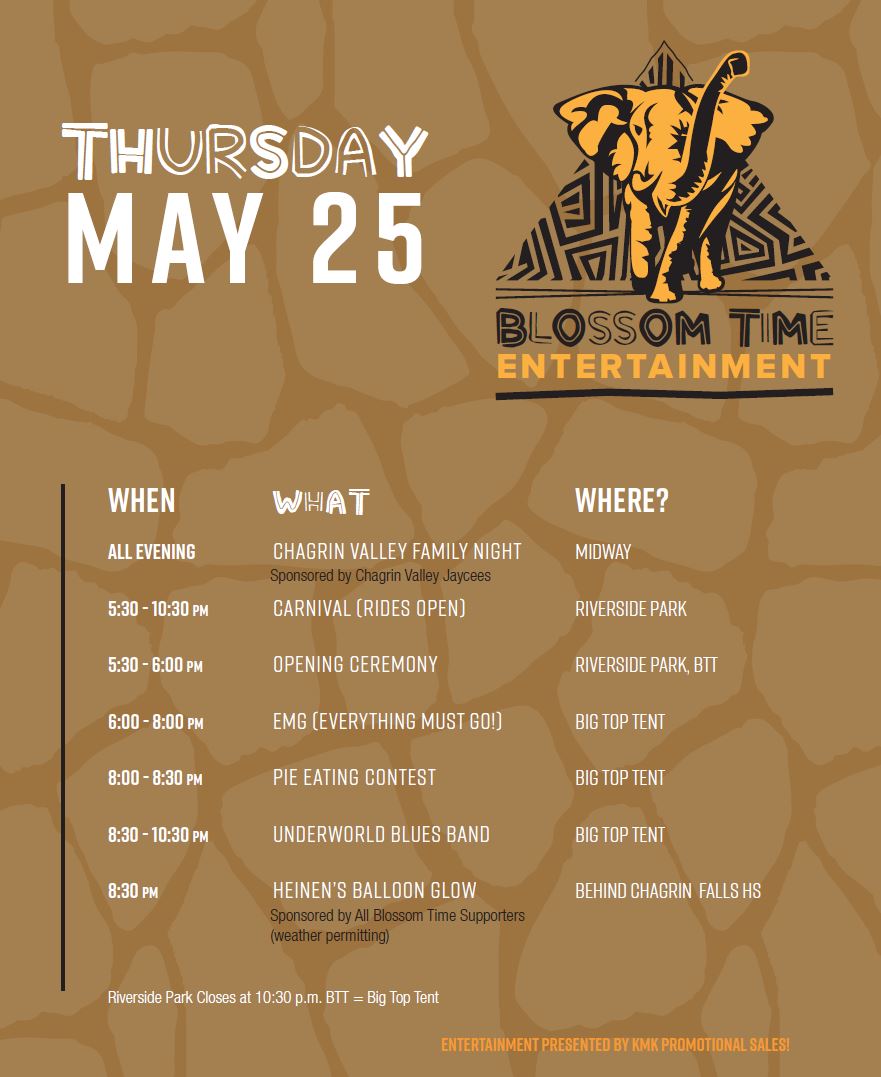 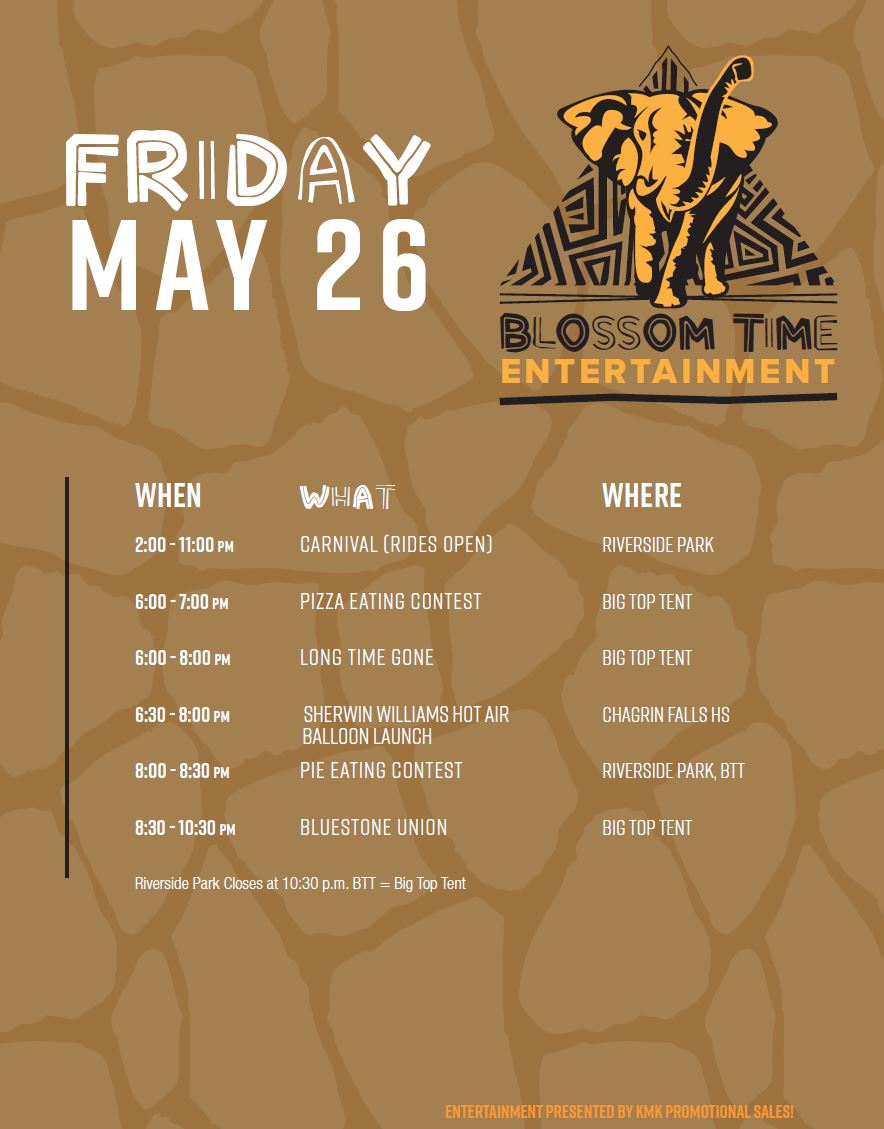 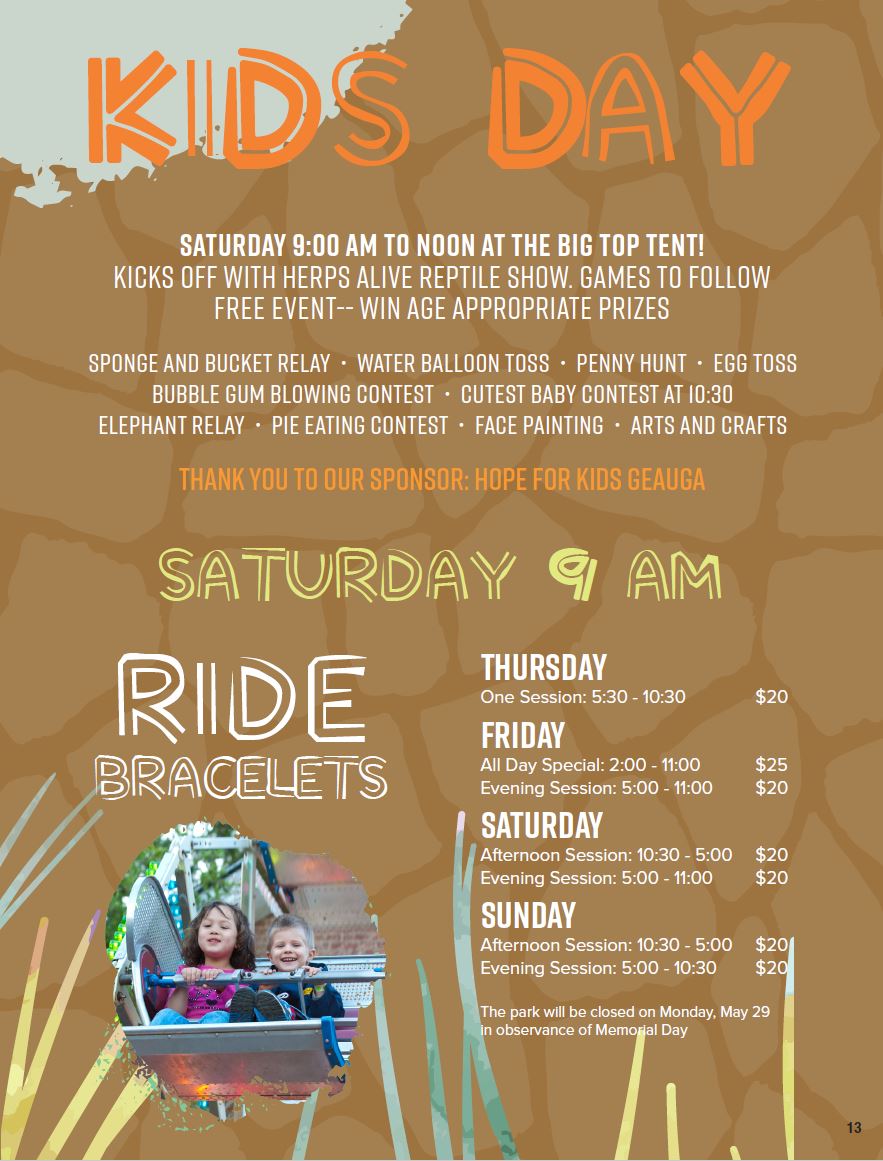 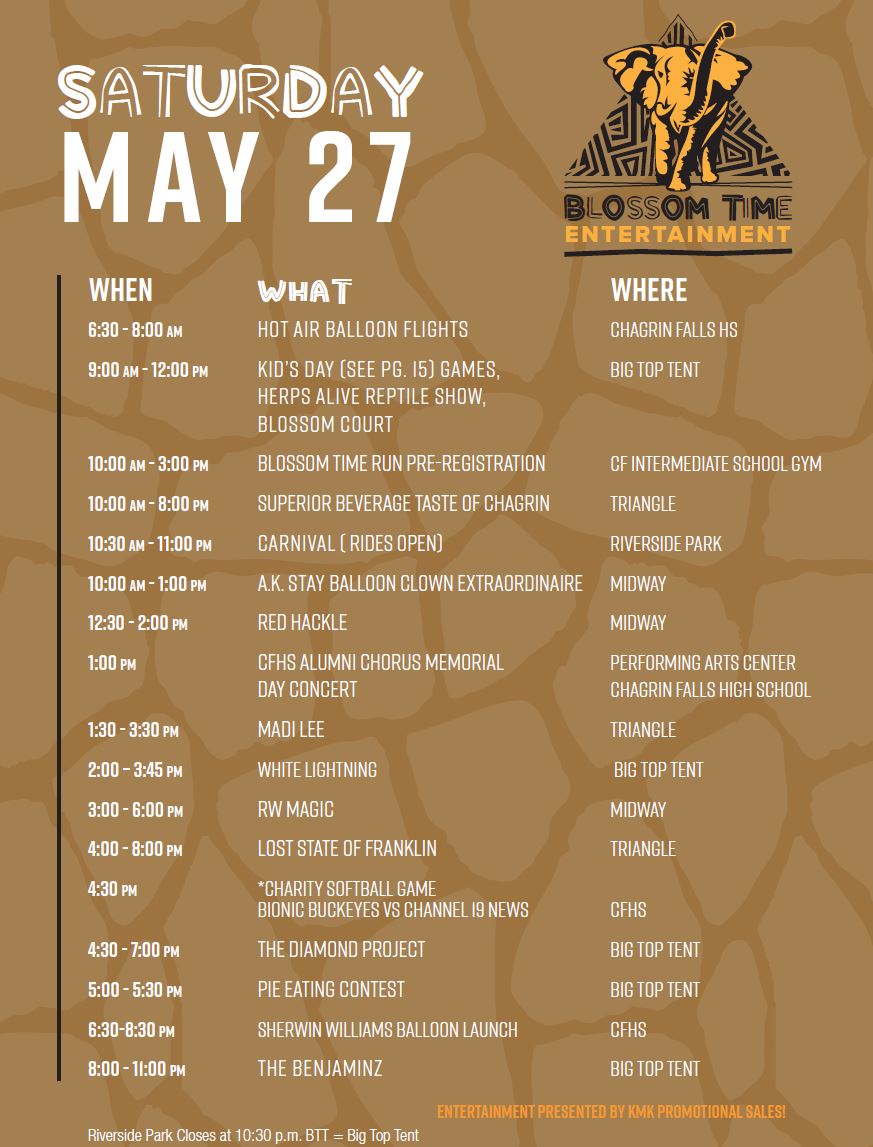 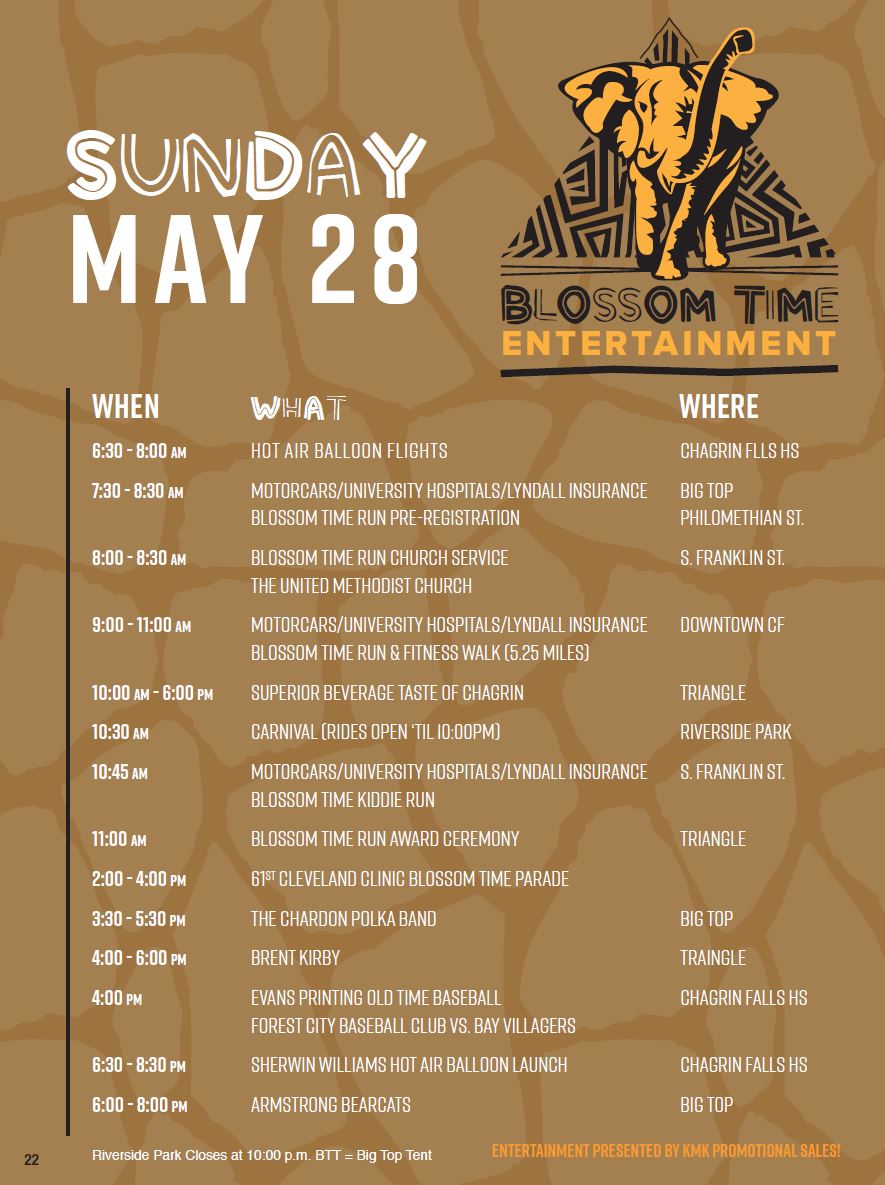 2. Fill out race form and return

There’s a third option to register at the Chagrin Falls Intermediate School Gym (77 East Washington St. Chagrin Falls, OH 44022) but you risk not getting a shirt if you wait. Those who are pre-registered will guarantee themselves one of the ever-popular Blossom Time race shirts.

What is the “Split the Distance” race series?

The Blossom Time run is now a part of a Chagrin Falls series of races including the Labor Day Dash (4.75 miles) and the Thanksgiving Turkey Trot (3.1 miles.)

In this series you will receive a “half marathon” (approx.) time which will be calculated for each Series participant at the conclusion of the 3 events. It will include your times from Blossom Time, Labor Day Dash, and Turkey Trot. This series time will be tabulated and posted as a PDF on the site. The cost of the series is $60 and enters you into ALL 3 RACES.

As always, big thanks to our sponsors! 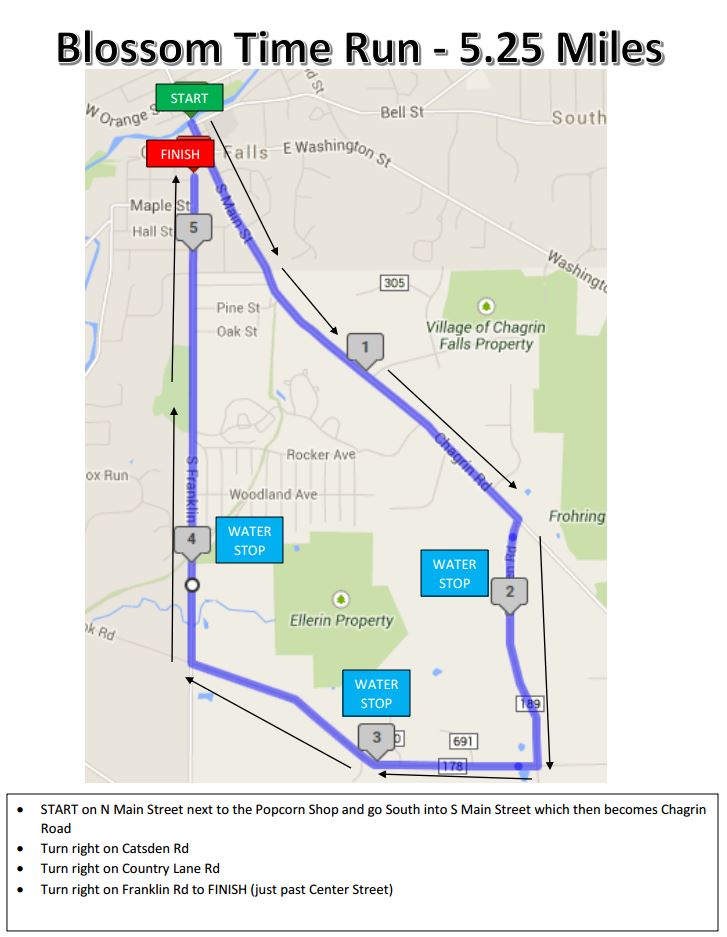 The greatest asset of this organization is the effort and quality of its volunteer force.  There are still areas in need of support for Blossom weekend.  Please take a look at the schedule below and reach out to the Manpower Chairmen (Mike Tomaro, Jason Zuber and Chris Dean) at cvjcboard@yahoo.com for fill-ins.

Coming Up Big, Topped with a
Little Extra

The once Chagrin Valley Chili-Cook Off, this year turned into the
Chili-Brew Off exceeded expectations in many in a variety of different aspects.  All fundraising goals related to providing
costs for the Chagrin Falls Safety Town and the Shop-With-A-Cop program were
accomplished.  On top of this, the event
this year saw record breaking numbers in attendants as well as proceeds.

The event this year was held at the Family Life Center located off of
RT. 306 and hosted 27 various Chili’s concocted from Valley Restaurants,
Service Departments and Amateur Chili Connoisseurs. This year’s occasion also
provided a category entirely new to the event which was that of a Craft Beer
Sampling and Competition; leading to the name change “Chili-Brew Off”.  Ten Craft Brew masters from various areas in
Ohio and one from Boston joined in participation.

After careful consideration, the panel of judges with expertise in chili and the culinary arts declared the following three winners in their respected divisions:

The vote of the people went to the following.

And the people choice vote for the best Brew on the Craft spectrum of
the event went to the following:

The Chagrin Valley Jaycee’s would like to give a special thanks for the
Chagrin Falls Panini’s for providing goods for the event.  The Paninis in Chagrin actively participates
in a number of activities in town that makes the Chagrin area what it is and
their efforts are truly appreciated.

For me details on this year’s event click here.

Restaurants that Participated in this year’s event.

Service Groups that Participated in this year’s event.

Amateur Chili’s that participated in this year’s event.

Auction Items at the event

Kevin has 15 years of experience in the
culinary industry.  He has worked in the
Columbus, Pittsburgh and Cleveland areas.
He currently works for the Hyde park restaurant group as a multi-unit
chef, helping design menus and opening of the new restaurants.

“Lonnie” has been a chef for over 35 years. He
attended a Food Service Program out of the school known as the Betty Patton
Room. He was ranked top student out of 50 in the class to attend Johnson and
Wales University School of Culinary Arts located in Providence Rhode Island. He
worked for 32 years at Gamekeepers Tavern and was the Executive Chef for the
past 20 years. He also worked at Sundance Valley Party center, Bella Luna, East
Side Mo’s, Bass Lake Tavern, M-Italian and Mad-jacks. Lonnie has a Southern
Fusion style of cooking.
He has also
judged several rib contests in the past.

A chili connoisseur for the ages.  Drew has entered countless Chili’s into
multiple competitions for over 20 years.
As an infant, Drew was fed chili a long side his baby food to keep him
toasty during the winter months when heat was desolate.  He is the proud founder and owner of
Tewksbury Hot Sauce that can be tried at local restaurant establishments. “Tewks”
has over 3 years of Chili judging experience. Spice literally flows through
this man’s blood.

–Click Here for the River Side Park Booth Application

The Taste of Chagrin Falls

–Click here for the Taste of Chagrin Food Vendor Application

–Click here for the Taste of Chagrin Food Truck Application

What you
will need:

Arrival and Check in:

Upon arrival, please contact one of the chili-chairmen to sign in and they will direct you to your table.

Please Show up to setup your stations anywhere from 4:00pm until 5:00pm.  Be sure to heat up your pots of chili as best as possible prior to the event as we will need to hit the temperature of at least 165f prior to giving out the chili.

Awards will be given to the winners of each category.

We are pleased to have you
join us in our event and put the best chili you’ve got against the local
competition.  Not
only is the event fun to participate in and show off your chili making skills, all
proceeds go to support the Chagrin Falls Safety Town program as well as Shop
With A Cop.  Please come and enjoy the
company of good friends and family, support the local community, and simply
enjoy some of the best chili in the Valley!

If you are interested in entering the
chili cook-off please fill out the associated Entry Application.

The event will be held at the:

We will provide burners and thermometers to
maintain and measure the heat of the pots, cups for the chili, napkins, and
plastic utensils.

It is indeed a sad day when the local newspaper condemns a volunteer organization without a legitimate basis.  That may be bad enough but what adds insult to injury is when an unsigned opinion piece levies harsh criticism that strays far from the accurate reporting of fact and crosses the line into tabloid-like rumor and innuendo.

The July 30 Times piece addresses the Chagrin Valley Jaycees’ decision to cancel the Kelly Miller Circus.  Threatening comments were made to a telemarketing firm hired by the Circus.  This information was first communicated by a telemarketer to the Jaycees, who then reported it to the Chagrin Falls Police. A police report later verified the nature of the comments and that they were in fact communicated to the telemarketer.

The editorial assails the Jaycees’ decision to cancel the event based upon remarks by the police suggesting the threats were not credible from a law enforcement standpoint. That alone is all fine and good.

Then, without a shred of factual support, the CVT went a step too far by accusing the Jaycees of “defamation”. The CVT exclusively links the threats to animal rights activists and blames the Jaycees for tainting this group by canceling the event. The credible source for the Times’s connection?  Only an undisclosed “indirect association.”

No one else has even suggested such a notion; including the police, Chagrin and South Russell government officials or even the Jaycees, but the CVT created the illusion and ran with it.

At the time that the threats were communicated to us, we found them to be sufficiently alarming to decide to cancel the event. That the police may later find the threats to not be credible was of no consequence to the decision as we value human lives and wanted to be proactive. The safety of our friends, family, performers and the community (including the peaceful protesters) could be in jeopardy.

Indeed, as accurately reported by other news outlets, both police departments later (and South Russell Village) supported our decision; important facts that were also left out of the Editorial.

We expected that many would be disappointed in the news – no more than my two young children.  Yet when one accepts the responsibility of putting on events that are open to the public, safety must be the primary concern.  If we were wrong, then we erred on the side of caution and no one was injured.  We are proud of this and do not regret for one minute the decision we made.

But as this unfortunate episode demonstrates, responsibility is a two way street.  We did not reach our decision based upon whether the police were going to press criminal charges or even if they would pursue any investigation.  We did so independently and only after great consideration.

The citizens of the Chagrin Valley and the readers of the CVT deserve better, and the Chagrin Valley Jaycees deserve an apology. The Times should look into the mirror and perform a more thorough scrutiny of its own work before so recklessly condemning the good-natured actions of others.